How to Read a Snuff Bottle

10-3-2011 at %I:%M %p
Comments are closed
Rich and fascinating the way to describe snuff bottles, as this lets us to reveal the mysteries that are represented.
Over the many Catalogues I have examined, both from private collections and from auctions, these are always described in the following way

To this Decalogue another point is to be added as it comes to the rich photographic material to better enhance the particularity of the item, to better complete the masterpiece identification. The reading of the following bottle is a practical example of what it has been previously listed. 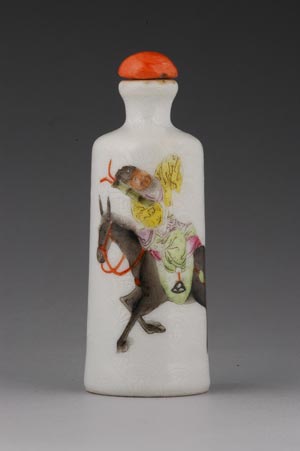 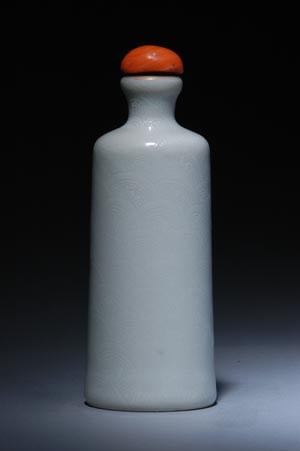 Porcelain Snuff Bottle. Snuff bottle cylindrical shaped, flared towards the bottom end, made by porcelain. The decoration represents the divinity named Zhang Guolao riding a donkey backwards, made by polychrome enamels, “pink family” kind. The white bottom end of the bottle has scratches in the paste with a circular motif repeated and over-enamelled. Rounded off sides, high neck bearing a seal just before the mouth, limited circular bottom end, bearing a little indentation on the inside, with a seal mark from Emperor Daoguang, made by red enamel.
Height 7,3 centimetres.
Altezza cm.7,3. 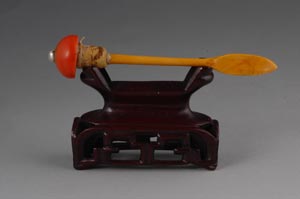 Coral stopper with a pearl, ivory and cork layered spoon, old but not belonging originally to this bottle (XVIII century).

Production by the Imperial Kins in Jingdezheng, sealed “Daoguang nian zhi da Qing” meaning “Made under the Emperor Daoguang, from the great Qing Dynasty” 1821-1850. 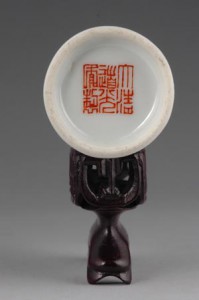 This bottle was made by the scratched bottom body technique, with an enamelled layer over. These are quite uncommon snuff bottles, this in particular outlines the figure of Zhang Guolao with the technique of the scratched carving under enamels “rose family” kind.
The figure of the donkey or mule was not carried out along this technique and was instead painted on the surface. 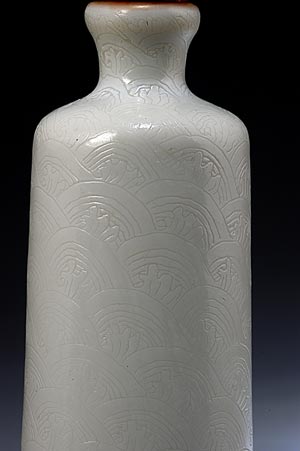 The decoration is well outlined and spaced, painted with knowing skilfulness.
Zhang Guolao, who lived by the VII century, was a cultured official who turned to a hermit’s life. He is portrayed riding a mule or an ass, sometimes black sometimes white, which he wraps in a paper sheet, and brings it back to life by sprinkling some water drops over it. He carries along a playing instrument made by bamboo stems, called “Yugu”. Sometimes he rides backwards, and he is the patron to painters and calligraphers.
He is one of the Eight Immortals, He became immortal by swallowing the mud ball he was given by “Li Tienguai” who resuscitated dead fishes. In the Victoria and Albert Museum Catalogue (page 256 number 5) there is a snuff bottle scratched on the bottom end with the same motif, waves, and over enamelled, dated about 1850-1910.
Even in the catalogue belonging to the Holden Collection, page 215 nr.91 there is a snuff bottle represented bearing the same motif of the bottom end, dated 1720-1850