The decor themes: Mythology and Symbolism in Chinese Culture

The fascinating snuff bottles world becomes richer with decorative themes on their surfaces. Decorative themes are always part of a symbolic tradition belonging to Chinese myths and legends, as they are not merely intended as bottle ornaments. These themes are inspired by:
The world of invisible, the unreal, epics and Chinese culture mythology, represented by mythological creatures.
The world of visible nature: animals and plants, mountain landscapes, rivers and figures, all those are linked to legend and ancient paintings.
The vast themes about Asiatic and Chinese religious heritage: Buddhism, Taoism. 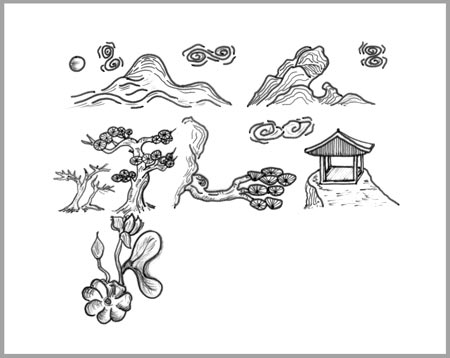 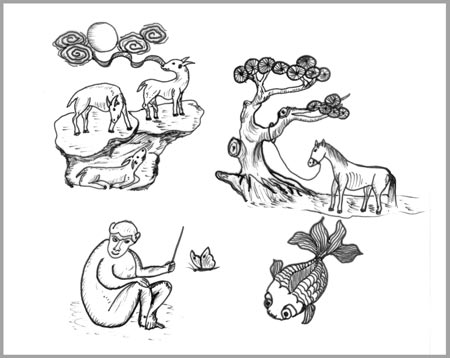 Decorative motifs inspired to the real world: animals and plants

The themes inspired by the real world such as animals, flowers and plants, both single or combined, are always linked with a meaning or make a certain wish. Every single snuff bottle, because of its hidden meanings, is a masterpiece, linked with the client’s needs, or with something occurred, or to a wish that was to come true. A flower, a fruit, a creature are not just simple decorative motifs, but also hide a meaning to be discovered by the connoisseur, that he may understand what exactly such a small bottle was to mean in the particular moment when it was produced, and why this had been made, even if this is quite a difficult work to do. The list that is to follow is just a short scheme listing some among the most common meanings of the themes represented in the whole artistic snuff bottle production, having the natural world as their inspiring subject.

Many religious decorations are linked to those religions practised in China. Symbols, divinities histories and legends linked to the main three religious communities such as Buddhism, Taoism, and Confucianism are represented in many snuff bottles, thus enlarging the bottles decorative themes. Even in landscape and plant decorations, many symbols appear linked to the religious heritage, this demonstrate how this may have influenced Chinese culture so much.